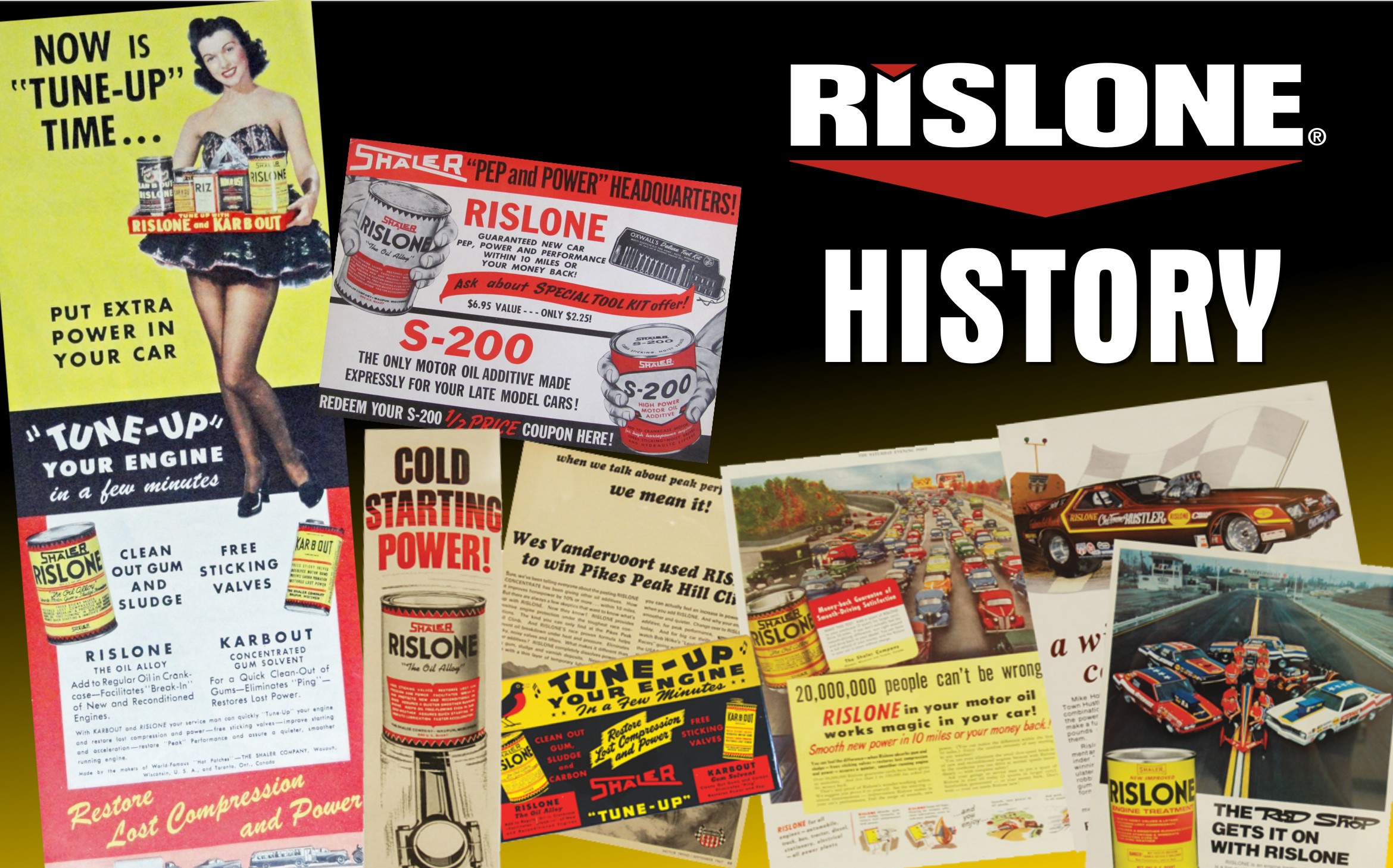 RISLONE
The original premium automotive chemical company, was founded in 1921. Over the years, the company gained popularity in the international realm with over a century of innovation and millions of loyal customers. We continue to evolve alongside the industry’s automotive technological changes in order to create the most complete line of products that serve the broadest range of automotive needs – from repairs, to maintenance, to getting peak performance from your engine. REPAIR.RESTORE.RENEW.RISLONE.

THE EARLY HISTORY OF RISLONE
Founded in 1921 by the Shaler Company, Rislone was one of the original automotive chemical additives. The machining tolerances for early automobiles were not what they are today. Subsequently, one of the major problems was improper piston ring seating. Engines often had to be torn down every 3,000 to 5,000 kilometres and re-ringed.

Rislone was originally sold in glass bottles through service stations along with Shaler Hot Patches, a vulcanizing system for tyre repair. In the 1930s, Shaler built product awareness by combining showmanship and salesmanship with the Shaler Traveling Circus. Along with the engine performance benefits, Rislone was instrumental in coining one of the most common phrases in automotive vernacular: The Tune Up. In the late 1930s, Shaler developed a training system for mechanics called the Shaler Rislone Tune Up System. The benefits of a Tune Up to both customer and service provider were numerous. By enhancing a regular oil change with the addition of Rislone and Karbout, a Shaler product for cleaning carburetors, the mechanic was able to guarantee the customer "Feelable Improvement” in the car’s performance. Locations that followed the system were designated as "Authorized Tune Up Service Stations."

During the 1940s and 50s, Rislone was offering a "Money Back Guarantee of Smooth Driving Satisfaction." Advertisements in publications such as Life and The Saturday Evening Post challenged drivers to add Rislone during an oil change, and then drive 16 kilometres. If the beneficial effects of the additive were not felt within 16 kilometres, they could return to the dealer for a full refund. Of the more than 20 million guarantee cards issued with the purchase of Rislone, fewer than one half of one percent were returned for a refund.

FAMOUS USERS OF RISLONE
Throughout its impressive history, Rislone has provided enhanced engine performance in a wide variety of applications.

Perhaps the most famous user of Rislone was Admiral Richard Byrd during his expedition to the South Pole. A letter sent from the expedition’s supply officer to the Rislone distributor, along with an unused can from the trip, states that,"... as our expedition was the first in the history of Antarctic exploration to use, successfully, completely mechanized transport - which consisted of three Citroen tractors, a Cletrac 30-40 and two Ford snowmobiles - Shaler should be proud to be an undoubted factor in making for this success."

RISLONE’S RACING RECORD
Over the years, Rislone has been part of numerous successful auto racing teams, as
both a sponsor and as a component in the high-performance racing engines.

1968 Bobby Unser in the Rislone Eagle Special wins Indianapolis 500 and the USAC
National Championship with Rislone in the engine.

Tommy Ivo used Rislone in his impressive four-engine, one engine for each wheel on
his Buick station wagon show car. The Buick could smoke all four tires for the entire
quarter-mile.

2007 Bill Reichert sets the NHRA National Hot Rod Association World Record for the
fastest Top Alcohol Dragster MPH Mile per Hour 284.75 and Quickest ET 5.103 in
the Rislone Dragster at Houston, a record he held until 2010.

As well as the Top Alcohol Dragsters, Rislone also sponsors many other motorsports
such as Jr. Dragsters, Monster Trucks and Sprint Cars.

RISLONE - A NEW BEGINNING
The Mermuys family announced its purchase of the Shaler Company and Rislone name brand in May of 2006. The goal was to maintain the integrity of the original Rislone formula while updating the overall look of the products you see in stores today.

SMITS GROUP - THE NEW ZEALAND / AUSTRALIA AGENT FOR RISLONE
For over 35 years Smits Group has serviced the New Zealand automotive aftermarket focusing strongly on leading brands and customer service. Smits Group was appointed as the Australia / New Zealand distributor of the Rislone brand in July 2010. Our customers can be assured that our products are sourced with vigilance for their quality and high performance. Smits Group is a growing company which looks beyond the "now" and "here" and constantly looks to the future and abroad for potential development and innovation.